What is the difference between Kista Endometriosis and Ovarian Cysts? 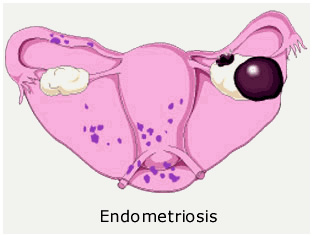 Kista Endometriosis is a condition in which tissue similar to the lining of the uterus is located outside the uterus. Usually there are implants of this tissue in the pelvis. When the lining of the uterus bleeds during the menstrual cycle, these implants also bleed. This causes pain and scarring in the pelvis. The other pelvic structures react to this bleeding by becoming adherent to each other so that tubes, ovaries and intestine are stuck together. If the endometrial tissue is within an ovary, that ovary will fill with blood. These are called endometriomas and are cysts in the ovary filled with old blood. This old blood has the appearance of thin chocolate or motor oil. They are also called chocolate cysts of the ovary. Endometriomas are frequently found at surgery for ovarian cysts. An elevated Ca-125 is often associated with endometriosis. (Source: William M. Rich, M.D. Clinical Professor of Obstetrics and Gynecology, University of California, San Francisco, Director of Gynecologic Oncology, University Medical Center, Fresno, California).

A video explanation on Kista endometriosis and its symptoms:
https://www.youtube.com/watch?v=yM88T1R8HD4 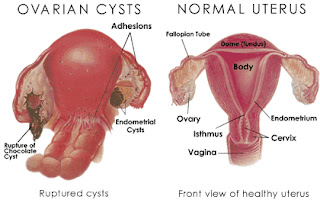 Ovarian cysts are fluid-filled sacs in the ovary. They are common and usually form during ovulation. Ovulation happens when the ovary releases an egg each month. Many women with ovarian cysts don't have symptoms. The cysts are usually harmless. (Source: Cheryl B. Iglesia, M.D., FACOG, Professor, Department of Obstetrics and Gynecology, Georgetown University School of Medicine; Director, Female Pelvic Medicine and Reconstructive Surgery, MedStar Washington Hospital Center; Food and Drug Administration Advisory Committee).

A video explanation on Ovarian Cysts and its symptoms:
https://www.youtube.com/watch?v=X8N4M_2dJh0

Why are so few major gynaecologic procedures performed laparoscopically?

The answer is relatively simple. Major laparoscopic surgical procedures are difficult for most gynaecologic surgeons to master. The gynaecologist must perform many simple laparoscopic procedures to develop the skill necessary to perform the more complex surgeries. They must perform these procedures on a regular basis to develop and maintain expertise. As a result, unfortunately, most gynaecologic surgeries for benign disease are still performed abdominally, although experts throughout the world agree that the vast majority could safely and efficiently be performed laparoscopically. However, it is important that the patient understand that these procedures should be performed by a qualified gynaecologic oncologist who has experience in the proposed procedure either using traditional surgical methods or Laparoscopic surgery.

The surgeries shown in the video clips are entirely done by Dr Vijayavel and my experienced team at KPJ Klang Specialist Hospital.