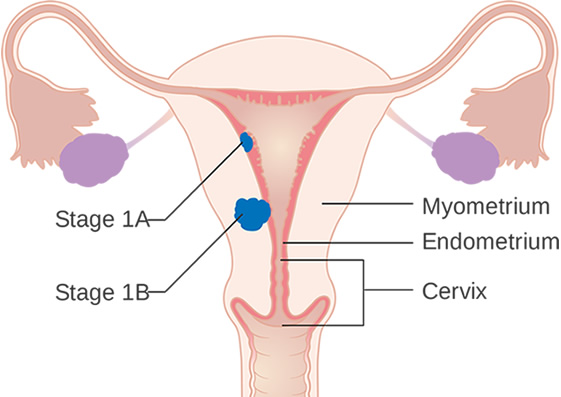 Because endometrial cancer is often discovered at an early stage of its development in the body, most women are cured. Even if the disease is not discovered until after it has advanced, treatment is still possible but the likelihood of a long-term cure is lower.

Uterine sarcoma is an uncommon form of uterine cancer that forms in the muscle and tissue that support the uterus.

If you are concerned about symptoms it is important that you see a gynaecologist (specialist doctor in women’s health). It is more likely that your symptoms are not related to cancer but it is important to have any symptoms checked.

Symptoms of endometrial cancer include:

See a doctor if you have any of these symptoms and they don’t go away and/or are unusual for you.

Surgery to remove the uterus (hysterectomy) may be done in women with early stage 1 cancer. The doctor may also recommend removing the tubes and ovaries.

Surgery combined with radiation therapy is another treatment option. It is often used for women with

Chemotherapy or hormonal therapy may be considered in some cases, most often for those with stage 3 and 4 disease.
Posted by Administrator at 11:06 AM